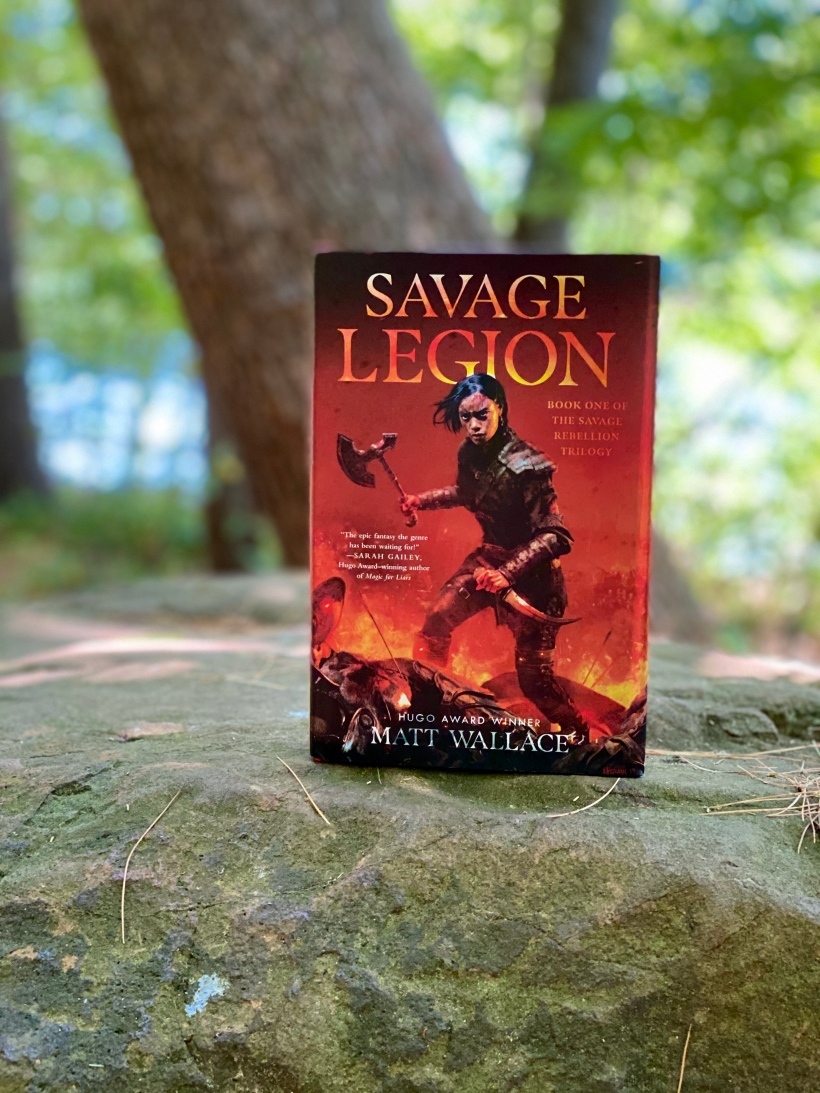 The empire relies on them. The Savages are the greatest weapon they ever developed. Culled from the streets of their cities, they take the ones no one will miss and throw them, by the thousands, at the empire’s enemies. If they live, they fight again. If they die, there are always more to take their place.

Evie is not a Savage. She’s a warrior with a mission: to find the man she once loved, the man who holds the key to exposing the secret of the Savage Legion and ending the mass conscription of the empire’s poor and wretched.

But to find him, she must become one of them, to be marked in her blood, to fight in their wars, and to find her purpose. Evie will die a Savage if she has to, but not before showing the world who she really is and what the Savage Legion can really do.

Jeez, it was only a few reviews ago that I was here gushing about the cover art of Chris McGrath and how I’m an absolute sucker for it. And here we are again.

Matt Wallace’s Savage Legion is a book that’s been on my radar for a wicked long time. It’s been especially fun watching Wallace’s excitement & enthusiasm on Twitter grow as the book’s release got closer & closer. This is his first foray into the world of fantasy, (but his food-centric urban fantasy series sounds pretty fun!) a book that he describes as being years in the making.

And goddamn, this was just…fucking incredible. Oof, this is a thrilling, expansive, unique fantasy novel written by an author with his heart on his sleeve. I really loved everything about it, and I’m excited to see what more folks think about it!

This is the first book in the Savage Rebellion series (I’m not sure how many books are planned), and it’s a multi-POV book. The number of POVs…fluctuates a bit, and that’s all I’m gonna say about that. I think this is an instance where a combination of the cover + the synopsis really doesn’t tell the whole story (well, obviously it shouldn’t tell the whole story, but YOU KNOW WHAT I MEAN) as far as the structure of the book.

Evie is the only character named in the synopsis. Based on that, and that wicked cover, I just assumed Savage Legion was her story entirely. But that’s not the case at all, and I think the book is so much stronger for it.

That said, Evie is FUCKING RADICAL! The so-called Savage Legion is an army of conscripted people. The condemned. The murderers. The worst of the worst, right? Mmmmaybe, maybe not. Evie finds herself part of this ragtag group, no real soldiers among them. Their country, Crache, sends them hurtling at the frontlines of their enemy, in chaotic, blood-drenched attempts to soften the opposition up before sending in the real soldiers.

It’s awful, and it’s all done in secret. In fact, that’s a huge theme of the book, and it’s a startling reflection of what’s going on in our world today. The idea of Crache, the image that the powers-that-be have created of it, is all a closely guarded, violently protected secret. And it’s really fucked up.

One of the other main POVs is a character named Dyeawan, and I think after sitting with this for the last day or so…she was probably my favorite character. She’s a young girl, pulled off the streets of Crache, and thrust into a world of invention, science, intrigue, and of course, Very Dark Secrets. This is a brilliant girl who comes from nothing, and seems poised to be a central character in the remainder of this series.

I would be remiss to not talk about Savage Legion, diversity & representation, and about my (new) bad habit of reading negative reviews of books I’ve recently finished & loved. There’s a lot to unpack, so I’ll try to make this concise & hopefully it will make some kind of sense.

I really think Matt Wallace did a great job of creating a diverse, inclusive cast of characters for Savage Legion. Which of course means that, inevitably, there are some shitty reviews that accuse him of “checking boxes” in order to sell the novel. These are the same people who think being queer is a political agenda, or that Black Lives Matter is “an opinion.” So, you know…they can fuck off into the sun.

Savage Legion does feature a couple nonbinary characters, one of whom is a major secondary character (if that’s a real term?). Taru is their name, and they’re sort’ve a bodyguard-type character (but not exactly), and just an overall incredible & badass character. TARU MUST BE PROTECTED AT ALL COSTS!!!!

Additionally, Dyeawan is a wheelchair user, so there’s great disability rep in this one as well!

So, I guess Matt Wallace was a professional wrestler at some point in his life, which certainly provides him with a great perspective on how to craft a fight scene. And like…holy fuck. Some of the action sequences in Savage Legion are just jaw-dropping, bone-crunching affairs, the likes of which I haven’t seen much of outside a Joe Abercrombie novel.

I loved Savage Legion with my whole entire heart. Epic battles, an incredible cast of characters, a shadowy government with zero fucks to give about its people, and the hope that comes with rebellion. Yes, please, give me all of that and more!!

Endless thanks to Saga Press for sending me a copy!! Savage Legion releases TODAY!!